National Checkers Day is celebrated on September 23rd, and with November voting around the corner, it might be a good time to look at a few pups that made a big impression on the political stage.

In 1952, Richard Nixon was the Republican nominee for Vice President on the ticket with Dwight D. Eisenhower. Nixon, however, was under fire for accepting personal gifts from donors and was in jeopardy of losing his place on the ticket. Television was a relatively new medium in 1952, and Nixon decided to use it to his advantage. So he reserved a half-hour of airtime and flew to Los Angeles to give a live, on-air speech addressing the allegations to a national audience. In the speech, delivered on September 23rd, Nixon said that he had received one gift he wasn’t going to return—a Spaniel puppy his daughter Patricia had named Checkers.

The “Checkers Speech” quickly became national news and the subsequent outpouring of support for Nixon cemented his place on the Eisenhower ticket and assured Checkers of a place in history. Note: Checkers Day is also referred to as National Dogs in Politics Day!

Checkers wasn’t the only dog to make its way into a pivotal speech. That honor also belongs to the Scottish Terrier owned by Franklin and Eleanor Roosevelt. Fala (whose full name was “Murray the Outlaw of Falahill”) was mentioned in a famous speech given by FDR during his fourth run for President in 1944. Republicans had claimed that FDR had left his beloved pup behind after a trip to the Aleutian Islands and had sent a US Navy destroyer back to retrieve the animal, at public expense. During a September 23rd address, FDR refuted the false claim and fired back at Republicans, asserting that Fala was furious over the accusation.

The speech was a success and helped secure FDR’s re-election. Fala outlived the President and spent his remaining years in the loving care of the First Lady.

The Clintons were well known for their cat, Socks. But as President Bill Clinton’s image was being jeopardized by the Monica Lewinsky scandal, and daughter Chelsea was leaving home to attend college, advisors thought that the presence of a presidential pooch might help reinforce the public’s idea of Clinton as a family man. So, an affable Chocolate Lab named Buddy was chosen as the new White House pet.

It’s uncertain how much success had in polishing Clinton’s tarnished image, but the lovable dog was a press favorite. In 1998, then First Lady Hillary Clinton wrote a children’s book titled “Dear Socks, Dear Buddy” featuring letters written by children to the presidential pets.

To say that Theodore Roosevelt enjoyed the company of animals would be an understatement. The White House during Teddy’s tenure was a virtual menagerie of dogs, cats, horses, a parrot, a badger, and even a small bear—some gathered from far-flung parts of the globe. Among these was Rollo, a friendly Saint Bernard who served as playmate and protector to the Roosevelt children. The sight of Rollo romping and playing with the kids on the White House lawn prompted one member of the press to remark that the dog seemed to provide as much protection as even the Secret Service could offer. 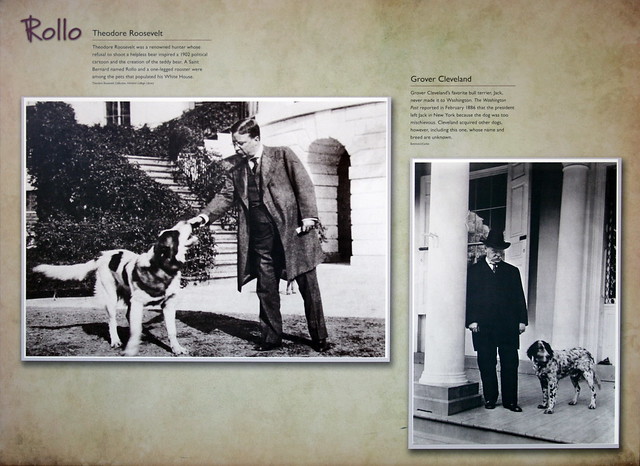 Rufus I, II, and Winston Churchill

America has no monopoly on political dogs. British Prime Minister Winston Churchill was well known for his love of animals, and had (in succession) two chocolate brown poodles, both named Rufus. Rufus I was sadly killed in an auto accident in 1947, and Churchill was so distraught that he purchased another poodle and gave him the same name. Rufus II often accompanied Churchill during his travels, and it is said that no one in the Prime Minister’s household was permitted to begin a meal until Rufus had been given his bowl.

No matter which way you lean, there’s no doubt that Bo and Sunny were an iconic part of the Obama’s presidency. The Portuguese Water Dogs stole hearts with their shaggy faces and fluffy coats. Obama first promised his daughters, Sasha and Malia, a pup after the election. Bo joined the Obama family in 2009 at the White House as a gift from Senator Edward Kennedy. Sunny was adopted into the Obama family four years later in 2013. While we only saw Bo and Sunny make a handful of appearances, they certainly left a memorable impression.

Most of us have heard the superstitious...