Getting to know the Norwegian Forest Cat

Looking for a larger-breed cat with a regal appearance and an independent personality? You might want to consider the Norwegian Forest Cat.

Origins of the Norwegian Forest Cat

The Norwegian Forest Cat can trace its history to around 1000 AD, when black and white shorthair breeds brought to Norway from Britain cross-bred with long-haired breeds brought to the region by the Crusaders. During the age of the Vikings, the breed’s forbears were used as mousers aboard ships, where they were valued for their ability to control rodents that threatened food stores.

After World War II, a resurgence of breeding occurred to preserve their bloodlines in Norway. The Norwegian Forest cat rose to such popularity in Norway, King Olaf named the breed the country’s official cat.

Popularity in the US

Interestingly, the breed is rather new to the US, arriving in 1979—just two years after being registered with Europe’s Federation Internationále Feline—but they’ve found themselves a niche among cat fanciers. It wasn’t until 1993, the Cat Fancier’s Association accepted the breed for “full championship status.” The breed currently ranks 18th in popularity among cat breeds in the US.

Referred to as The Norse Skogkatt in its native Norway, and nicknamed wegie (pronounced “wee-gee”) in the US, the breed is a muscular, semi-longhaired cat that resembles the Maine Coon cat in build. Wegies possess tufted paws and an insulated double coat ideally suited to the cold Nordic winters, but this lavish insulation is relatively easy to groom. They do shed, but a weekly brushing should keep away the matts and tangles.

Colors include a range of browns from caramel to sienna and grays from a light smoke to graphite, often with white paws, chest or belly. Males typically weigh 12 to 16 pounds, with females being slightly smaller at 9 to 12 pounds. 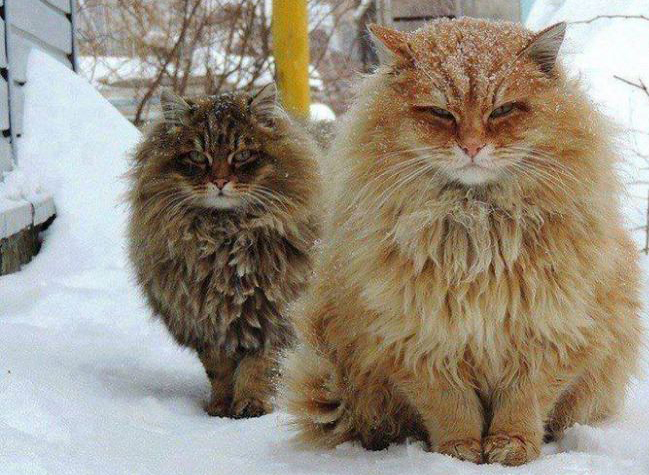 The wegie is a generally healthy cat breed, but does have a mildly increased risk for hip dysplasia, certain kidney ailments, and a thickening of the heart muscle (called hypertrophic cardiomyopathy) that is common in cats of other breeds, as well.

Personality of The Norwegian Forest Cat

When it comes to personality, the Norwegian Forest Cat is generally intelligent, adaptable, independent, and friendly with people it knows well. While the breed isn’t known to be super cuddly, they are very easy-going and do get along well with both children and other pets. Wegies have a soft voice, but they are chatty and are not afraid to make their needs known. Their large paws and climbing ability make them excellent hunters. You may want to buy a multi-level cat tree to keep your wegie amused, and out of the drapes. They enjoy being outside, but they also adapt well to home life.

Why the Norwegian Forest Cat Might Be the Right Breed for You?

Equally comfortable in urban and rural environments, wegies can be found on farms, in suburban developments, and in city apartments.

Here are a few other reasons:

They tend to have few breed-specific congenital health issues.

Lifestyle
How To Make A Homemade Dog Bed

Does your pup need a new bed? You could...

Lifestyle
How to Talk to Your Employer About Pet Insurance